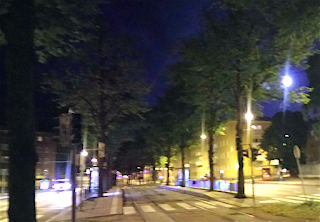 a short story by Herbert Wright

The late summer sky in Helsinki never quite darkens to black. The Finns call its deep blue colour ‘yönsininen’. Under a fathomless expanse of yönsininen, the power words can carry stopped me dead in my tracks. All because of a woman from a distant land who never spoke a single one to me.

It all started in a backwater boulevard of plain post-war apartment blocks, where tram tracks run down the middle between lines of trees. In one particular stretch is a pub that’s warm, casual and a little crazy. Random objects hang above the drinkers —  psychedelic lampshades, a Star Trek Enterprise, a glittering disco-ball, a bicycle, that sort of thing. Flat against a wall, a cut-out wooden fox wears boots and lurks near a rail line diagram the size of a bed. It’s not some pick-and-mix choice by an interior designer doing ‘eclectic’ — this stuff must have accumulated over years. There are candles, and rock music plays, quietly enough so the clientele don’t need to shout. No-one’s trying to be cool, unlike in some of the bars a few blocks away at Vasankatu. It was locals here, Valila district locals. It was the kind of pub you could sit in and let your mind drift.

Which is exactly what I was doing, sitting at an old wooden table in a nook at the back. I could just see the all-year-round Christmas lights by the bar. My beer was pleasant company. Half-way through it, someone came over. His beard faded into a shave as it approached his ears, and the hair didn’t kick in again until the top of his head, where it was thick and combed up. With a smart white shirt, blue waistcoat and a black jacket cut in the last century, this guy looked top-end hipster. He was with a black woman, a beautiful one.

I left the couple to themselves a while, but noticed that she talked about as much as my beer did. He drank his under her continuous gaze, like she was a mother watching an infant. Under a dark splash of twisted curls, she was dressed in loose silk with brown psychedelic patterns, it could be something to wear at a midnight beach party. After a while, he turned to me and asked me where I was from. I told him. He was local, he told me. Erland was his name, which made him one of the Swedish-speaking minority that long ago once held the upper hand in the land. His work was something digital in international logistics.

‘And where are you from?’ I asked, addressing his companion. She just sat there looking demure.
’Malawi’ said Erland. ‘She doesn’t talk’.

But he talked and I was happy to listen. He’d travelled, and spent time in hippy places in Asia. This place was a regular of his. When he got up to step out for a smoke, I followed him.

‘So, Erland — that woman, is she your girlfriend?’
‘No. Not really’.
‘Oh. Do you know her?’
‘Oh yeah, sure. She’s stayed with me. I know her well’
He lit up the rollie he’d just rolled.
‘She was the best sex I ever had’, he said quietly.
‘Oh, that sounds good’.
‘The best. We didn’t stop for two days, it was crazy. Not until…’
‘Yeah?’
‘Yeah, it was just a little while back. Some guy rolled up. Some boyfriend or husband.’
‘What?’
‘It was crazy shit. He was trouble’.
‘Wow, that sounds heavy. What happened?’
‘Well… let’s just say I had to change the lock. It cost me money’
He looked serious, but then he gave me one of those man-to-man sharing grins. ‘But man, I never had sex like that’
‘So, she’s back’.
‘Yeah, I dunno’. He dropped his ciggie and stamped it out. ‘We’ll see what happens. Don’t say anything’
‘Sure. You go back in, I’ll follow in a minute’.

Back at the table, they were talking quietly. Erland indicated they wanted to be alone. No problem — I got another beer and sat somewhere else. So it was a surprise when a few minutes later they joined me. She’d fallen into a state of silent vigil. He and I talked about the bars on Vasankatu, the dealers and bums around the station, the tubes of coloured light around the massage parlour doors and how you could eat the best veggie burgers in town out on that street.

When he slipped out for another smoke, I followed again. As I got up, I saw she had a big bag, some kind of canvas sack with leather draw-straps. It was bulging all over the place just like Santa’s when he’s setting off on a delivery run, but this wasn’t full of presents. I reckoned they were her life.
Outside, he was talking Finnish with some pissed Finnish Finn blokes. We all exchanged matey hellos, but I turned to Erland.
‘What are you doing, man? Have you seen the size of her bag?’
‘Yes’
‘It’s stuffed, it is truly stuffed! She’s got everything in there. She’s going to move in on you.’
‘Well, yeah, I dunno’.
‘It’s none of my business, but this looks serious. She needs somewhere to go because everything she has is in that sack and she ain’t planning on going back to wherever she just packed it’.
He gets it, he’s been around.
‘Jeez, man, you gotta think what you’re getting into! So just suppose you take her in again. Maybe it works out. Maybe it’s a dream come true. But what happens when that man shows up next time?’
‘Hm, yeah. She says he’s history’.
‘Just suppose he is history, do you want her to move in? It may be great, but it’s gonna change your life.’
‘Yeah. I’m an independent sort of guy, really.’
‘Right. So, what’s the deal? If I were you, I’d walk’.
‘Hey, I hear you. I know. It’s…’
‘It’s your call’.
He’s thinking. ‘I’ll just take her round the corner and say goodbye’ he says.
‘Have you had a sexual health check lately?’ I ask. He’s got one scheduled. He asks if I have a condom I can give him, ‘just in case’.
‘Yeah, sure’. I fish one out. We go back in.
I didn’t stay on long. It was late already, but I felt like a walk. On Vasankatu, the bars are in full swing, but the place I stop is a corner grill. I have some falafel and call it a day.

It’s around one in the morning when I turn into Sturenkatu, a wide street that leads to quiet places and to my bed. It was deserted. Overhead, the clear sky is that deep yönsininen colour. The warmth of the city had radiated away into outer space. Summer was on notice, and a wind was coming up, carrying early news of the Nordic winter to come. I climbed up the slope into the space between the big white modernist Meira building that used to be a coffee factory, its neons now switched off, and the brick industrial buildings of Konepajan Bruno, chimneys marked by black silhouettes in the yönsininen sky.

Then I saw a lone figure walking towards me. Oh —it’s that woman from Malawi. A slim dark figure in the empty night, with her big heavy bag. She sees me but looks away. Not demure, just neutral. No words. We both walked on without breaking a step.

So, she’s not staying with Erland. She’s out here, beyond warmth and shelter. Hopes dashed. She’s a long way from home. And I suddenly wonder — was it my words that cast her into the night?

I stopped. Should I turn round? No. We had never said a word. What would I have said now?