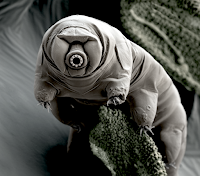 The Delivery
a short story
by Herbert Wright

THOU SHALT NOT DISTURB, it said on the door. Gabriel stood looking at it a moment, and sighed. It was better when he let his master sleep. He knocked. 'Rise up, my Lord!' he called. 'Awaken!'
A deep groan rumbled behind the door, long and rattling, like an underground train passing. Then the sounds of thunder, then a great sustained note, like a foghorn. Suddenly the door was open and a figure with crazy eyes and beard glared out. A boy slumbered on in a great bed behind him, a feathered wing lying across the pillow.
'Fucking what' said The Bearded One, more confused than interrogative.
'Alright, my Lord?' asked Gabriel.
'Grrr. Er. Wassup?'
'It's humanity'.
'Ugh. Those wretches.' He spat on the deep-pile carpet. 'What about them?'
'They've evolved'
The Bearded One gave Gabriel a penetrating look, one eye opened extra wide, the other squeezed almost shut. 'Eh?' he grunted. Gabriel repeated the news.
'No way… Humanity don't evolve! Not since medicine got developed. No more survival of the fittest- anyone can survive in the welfare state. The meek and wretched, haha!'
'How merciful you were, my Lord, allowing that, but...'
'Yeah. The NHS. Obamacare...'
'But...'
'Who says I'm vengeful, eh?'
'That was two thousand years ago! You've been sleeping. A lot of things have happened. You'd better come see'
'Hm. I have a feeling that this is gonna rile me up real bad'.

They entered the Control Dimension, which looked like a vast dining room with mirrored columns and walls making it impossible to gauge its size. Perhaps it was infinite. Six figures, some in military uniform, were seated around a long table, on which parchments, pencils, fruit and bowls of savoury nibbles were spread. They stood and saluted as The Bearded One entered. Chubby boys floating around the ceiling near them drew golden horns to their lips and blew a rousing fanfare.
'Shut up!’ yelled the Bearded One, but then threw a sly wink to one of them. 'Let there be beers' he said, and there were.
A character in a suit appeared from nowhere, his face that combination of eagerness and earnestness that newscasters have. Gabriel introduced him. 'Cassiel's been following it all. He'll explain'.
The Bearded One plonked himself down in a chair and started flicking chilli peanuts into his eager mouth. Sometimes his head darted to the side to catch them, as if he were a dog. Cassiel crisply drew down a virtual screen from the air. A schematic of a man and woman, just like the one on the Pioneer probes, appeared.
'My Lord, and most esteemed entities' said Cassiel. 'Behold the human. As Shakespeare said: “What a piece of work is a man. How noble in reason; how infinite in faculties...”'
'Poppycock! They're scum!' snarled The Bearded One. 'Born with badness, I tell you! There's only one with infinite faculties round here... Get on with it!'
'Very good, my Lord', Cassiel said, unflustered. A starfield appeared on the screen, and began to animate. He continued: 'Their three score and ten years meant that they would never be able to travel to other stars, the journeys would take hundreds, perhaps thousands of years. Yet by 2040 their astronomers had already identified all the Earth-like planets within thirty light years'.
‘2040? What, twenty to nine?' asked the Bearded One, deliberating each word.
‘No, not then. Eleven years later, my Lord. Twenty-forty'.
'Yeah, that's the evening, right?'
Gabriel intervened. 'The year 2040, my Lord'
'Gotcha' said the Bearded One, rather quietly.
Cassiel continued. 'And mankind did look upon those distant exoplanets with envy and greed'
Mutterings of 'envy and greed' echoed from the table.
'Then, in 2285, humanity broke out of the Solar System'.
The Bearded One's jaw dropped. He made Cassiel repeat it, but shook his head. ‘No! That's impossible!'
'Impossible by transport, my Lord, but not by transmission. Humanity simply sent machines that didn't mind travelling for a century or more to other star-systems, those machines found resources there and built more machines. Then humanity started transmitting all the information in their DNA to those distant worlds, where machine-built biosynthetic systems were ready to reconstitute it and start growing new humans to colonise the planets'.
'Well', said the Bearded One. 'They sure can be sneaky. But just you hold on one moment. That's not evolution. These are still humans!'
Cassiel changed the picture.
'Behold, the water bear, a.k.a the tardigrade', he said. The creature he showed was an ugly one, like a loosely inflated plastic tube with tiny arms and claws. Its circular mouth looked like a machine socket, or perhaps the bag nozzle connecting to an ancient vacuum cleaner.
'Yip, I remember! Cute little critters' said the Bearded One. 'Less than a millimetre long. Some of them live on moss. But you can freeze 'em, boil 'em, radiate 'em, take 'em out into space, and they'll come back to life as soon as you get 'em home!'
'Indeed, my Lord' said Gabriel, chipping in. 'The hardiest of all Earth animals'.
Cassiel nodded and resumed the briefing. 'Humanity realised that if they had the tardigrade's properties, they could colonise not just Earth-like planets, but other exoplanets too. So they started incorporating some of the tardigrade genes, and genes from other species as well - horizontal gene transfer. They designed themselves to be the fittest creatures that could survive on all sorts of worlds, and put themselves at the top of ecosystems which they populated with lesser species they also genetically engineered. Behold...'
The screen showed creatures floating in the clouds of gas giants, sitting with legs dangling in pools of lava, walking hand-in-hand across fields of craters under vacuum skies. Each had a human face, but with that strangely circular tardigrade-like mouth.
'My Lord' declared Cassiel. 'Humanity has taken charge of its own evolution, and is now loose in the universe'. He sat down.

A long silence fell on the table, except for the sound of The Bearded One sucking his teeth or occasionally guzzling beer and snapping shut his jaw on a flicked chilli peanut. Presently, he rose, his eyes full of fire.
'These humans have gone too far! Michael!' His voice rose. 'MICHAEL!'
One of the seated eminences stood up to attention. 'My Lord?’
'I want these upstarts tracked down on every planet they have taken, and I want them taken out. Unless we stop humanity now, they will infest everywhere there is. Now they're out of their cage, they might even come here... Smite them, I say, and smite them hard! Let's cleanse this slime from the Universe. That’s an order!’
'Yes, Sir!' Michael snapped back. 'Our armies shall rain vengeance upon the human wherever we find him… or her.'
He looked around. Everyone was watching. He had better play the moment a little further. 'Every man, woman and child hath wrought folly in Heaven and shamed the House of the Father. And so, though they may snivel and beg for mercy, nay, it shall not stop our righteous sword! By my Lord's honour, their blood shall be across the firmament!'
'Fucking right. Amen' said The Bearded One, as all raised their beers in agreement.

Just then, the sound of a doorbell filled the Control Dimension.
'Are we expecting anyone?' asked Gabriel.
Everyone shook their heads. Gabriel took command of the screen with some hand movements, and a CCTV picture appeared on it.
'Delivery' said a figure wearing an astronaut's helmet in the wavy picture.
'For whom?' asked Gabriel, sharply.
The figure read from a large envelope. 'It says “The Archangels, Control Dimension”'. She removed her visor, shook long blonde hair out, and looked into the camera. Even though the picture was black-and-white, her lips suggested bright red, and looked like they were saying 'oooh'. Perfectly round, like a nozzle.
'I just need a signature' she added.